Tens of thousands of festivalgoers have made the most of the final day of Latitude today – the first mass music event since Freedom Day on July 19.

Some 40,000 people have descended on Henham Park estate, near the Suffolk coast, since the annual event began on Thursday, and Sunday is the big hoorah.

Bastille, the Kaiser Chiefs and Rick Astley were among the 26 acts playing out the four-day festival.

Bombay Bicycle Club frontman Jack Steadman, whose band is playing this evening, said he could ‘see everyone’s excitement’ at the return of live music after months of lockdown and strict Covid-19 rules.

Steadman said performing was an ‘amazing’ experience, adding: ‘You could really see everyone’s excitement and that gave us a real boost.

‘The funny thing about musicians is it needs to be reciprocal sometimes.

‘We have all been trying to make music in the last year-and-a-half and do all these projects, but without these experiences where you are like, ‘Wow, these people are enjoying this’, it’s been quite difficult. 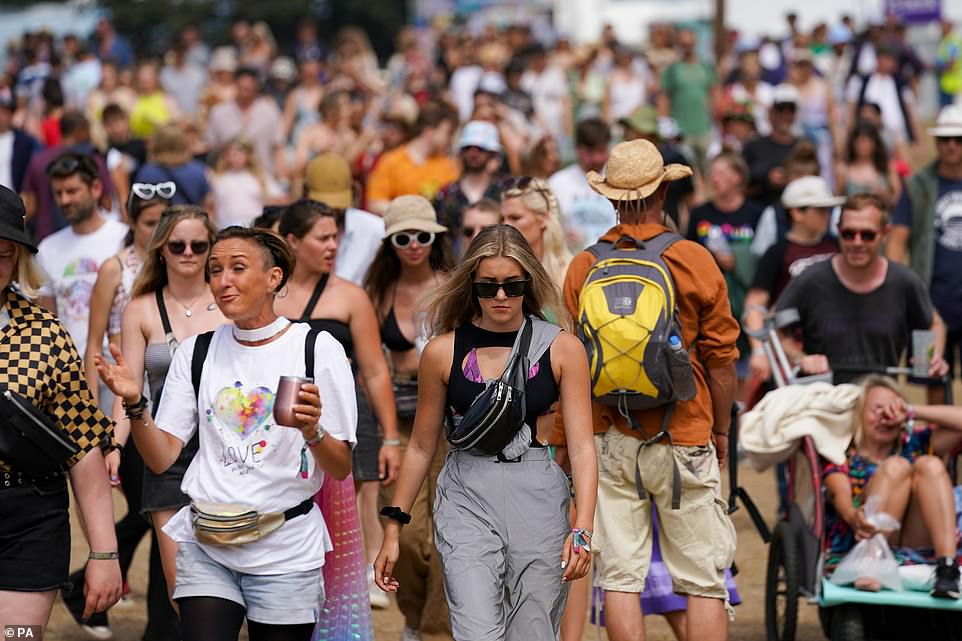 Festivalgoers enjoying the final day of the Latitude festival at Henham Park, in Suffolk, including one reveller being pushed in a special chair after injuring her foot 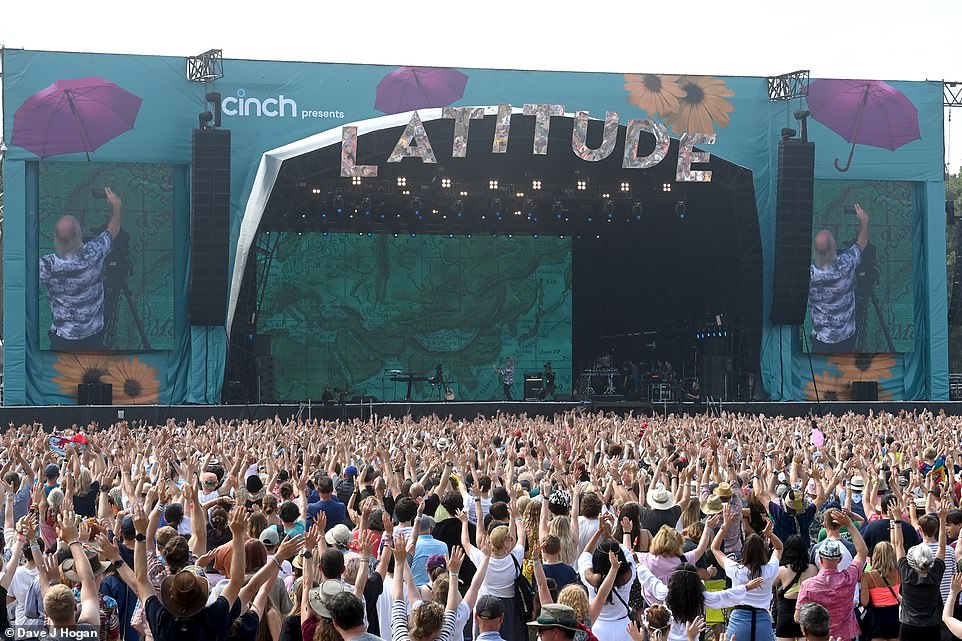 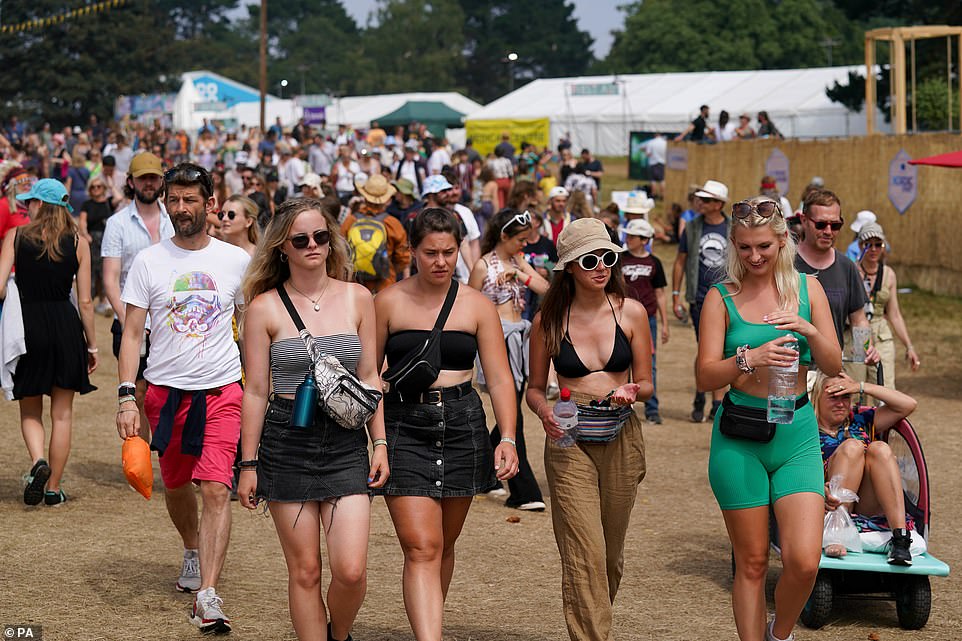 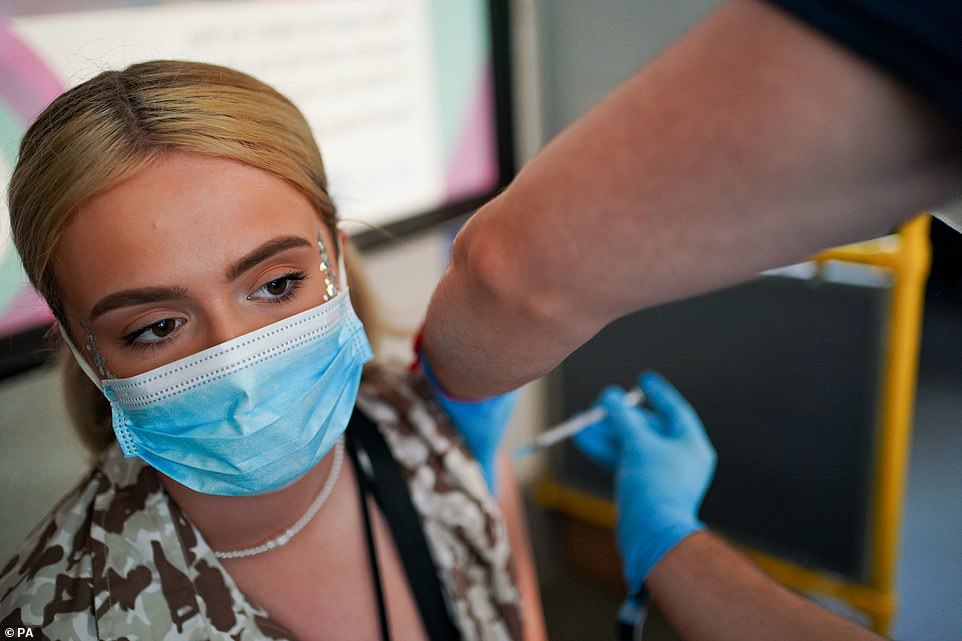 Ellie Harries gets her second Pfizer jab at a pop-up vaccination bus on the final day of Latitude, where revellers must show a negative test or be double vaccinated to attend 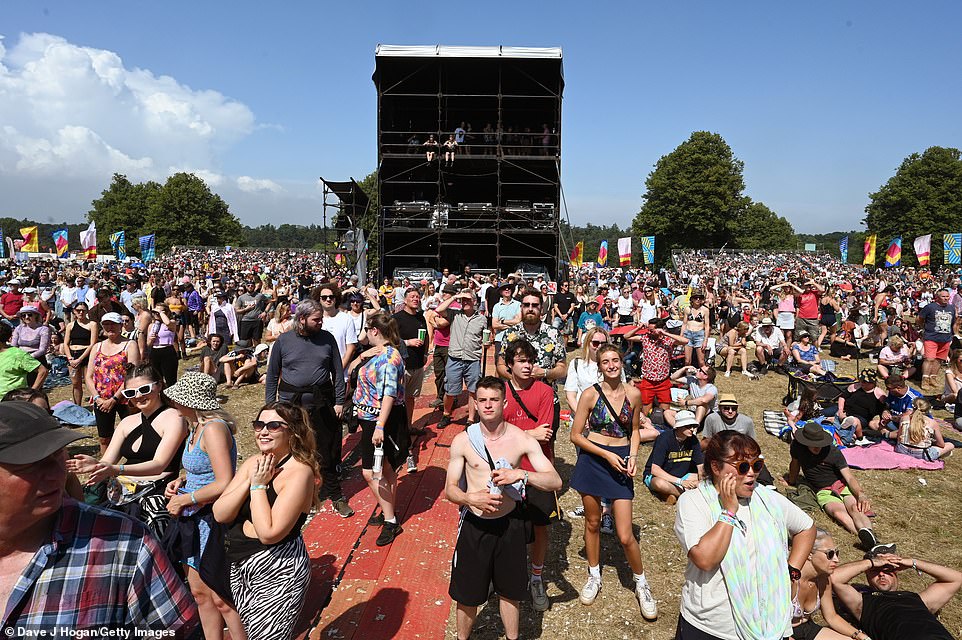 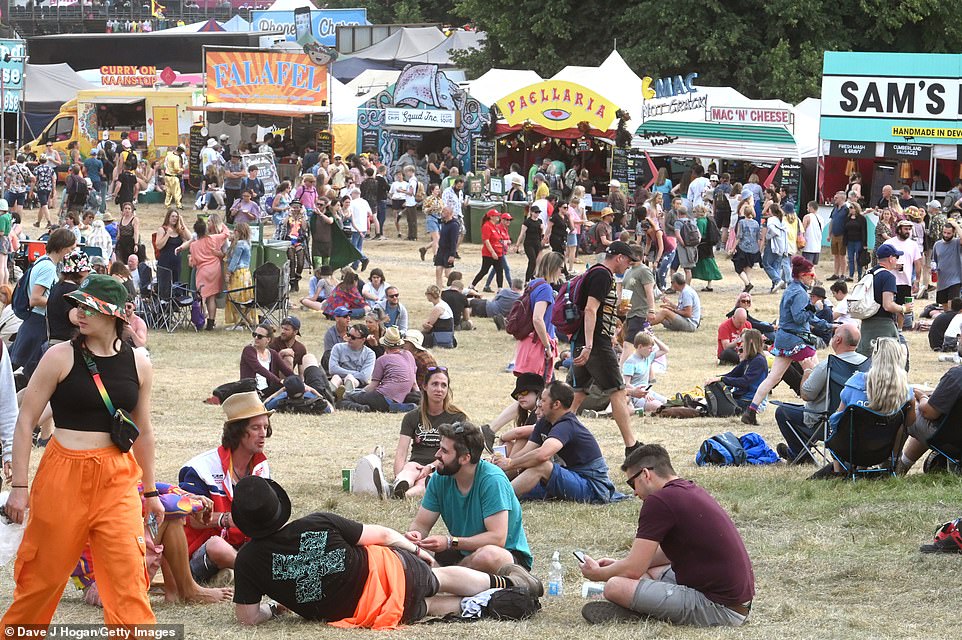 Groups of friends relax on the Henham Park estate on the final day of the four-day Latitude festival, which has seen 40,000 attendees 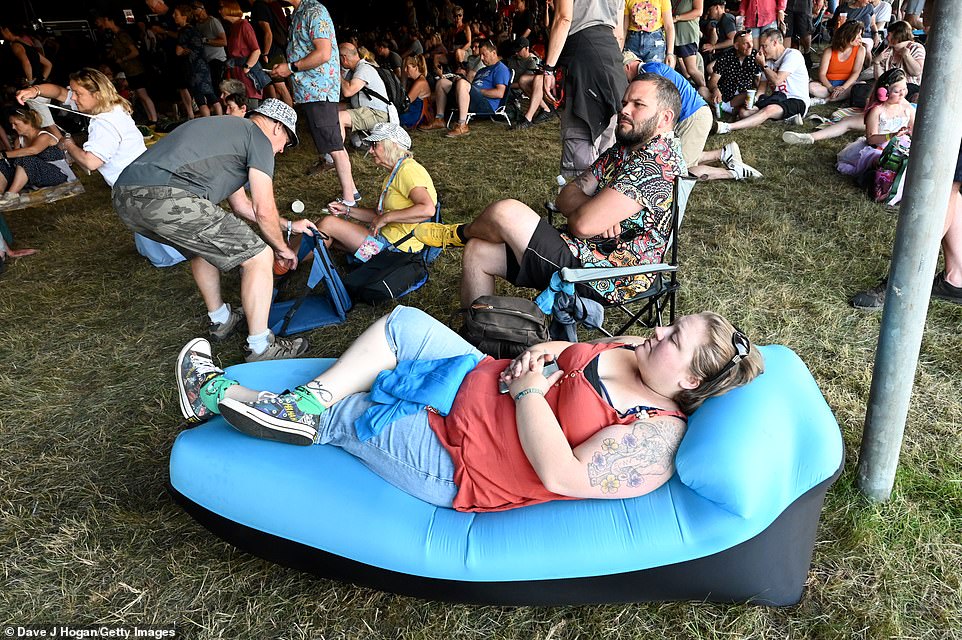 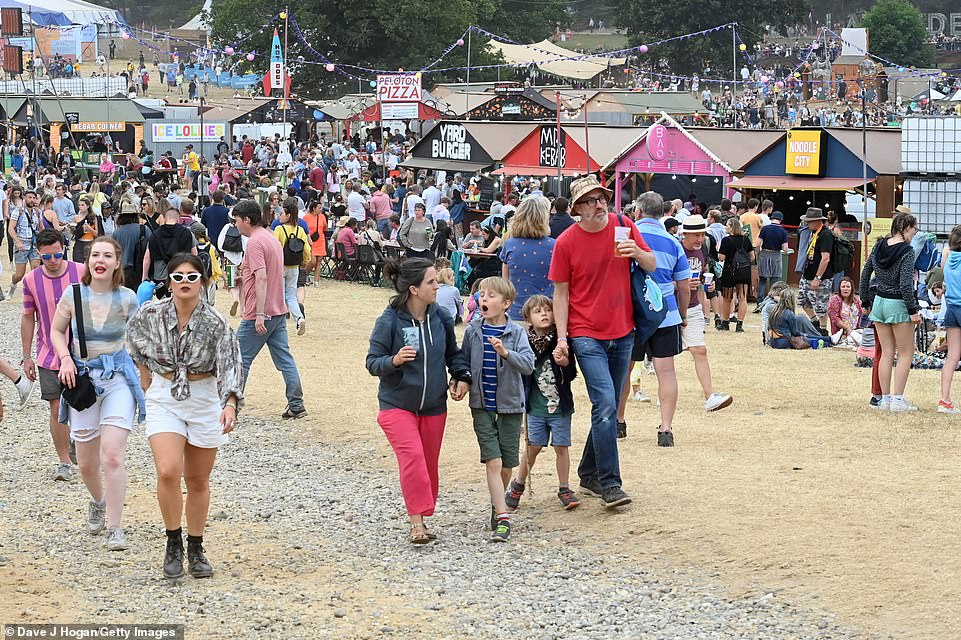 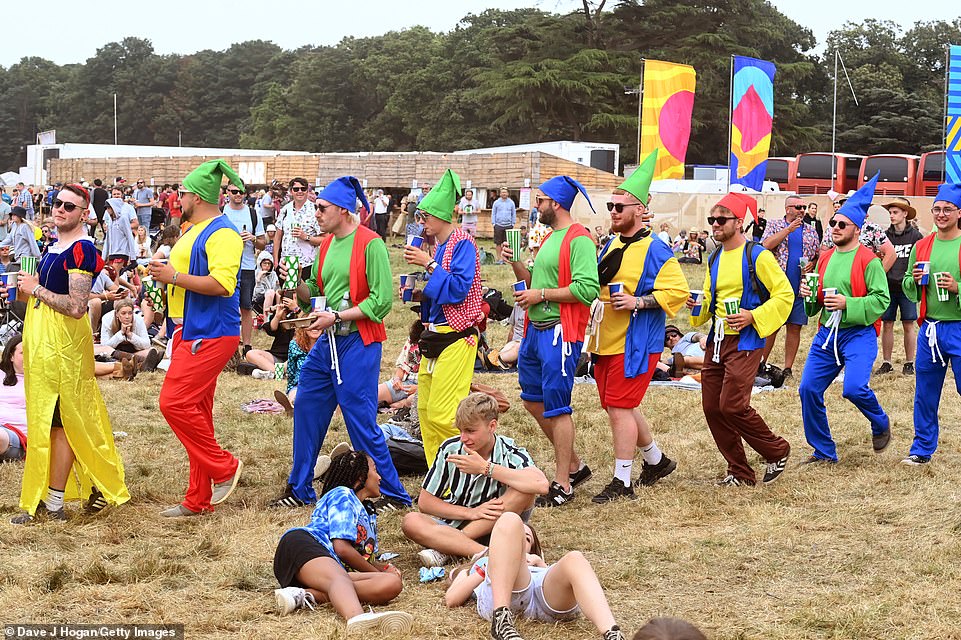 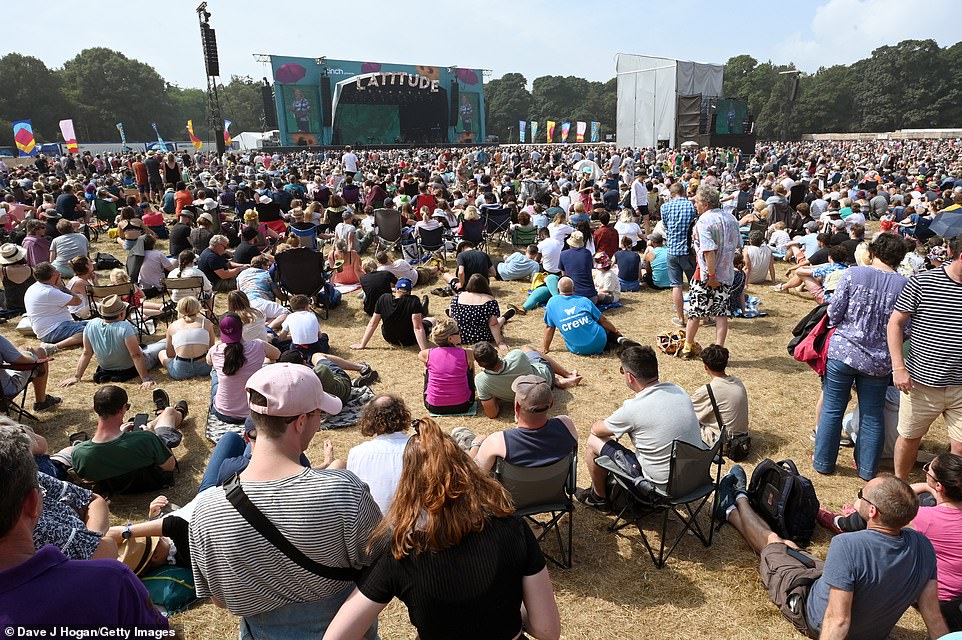 Hundreds of spectators chose to sit during Bill Bailey’s set on Sunday at the Latitude festival, the first mass music event since Freedom Day

‘We all have our insecurities in that way, I think all artists do really.

‘And so to come back and see people sing along and cheer, I think we are all going to leave here feeling really inspired.’

He added that performing on Sunday night will be ‘quite emotional’.

‘I really hope this isn’t the last time we can do this this summer,’ he added.

‘We do have some more dates booked, so fingers crossed.’

Workers at the festival said they felt ‘absolute unadulterated joy’ after being able to return to their jobs, the founder of the event said.

Melvin Benn said he has never ‘seen so many grown men crying’ as he has at the festival.

Mr Benn said: ‘I don’t think I have ever seen so many grown men crying and just literally people standing on stage and not being able to communicate because they are in tears.

‘Front of house managers, builders, scaffolders etcetera just suddenly realising that this is the life that they were living and that they had lost.

‘Some of them really thought they would never get it back and I think we have managed to get it back.’

He said the event has ‘gone to plan’.

‘It’s very much as anticipated so I’m feeling relaxed,’ he said.

‘It was a huge pressure trying to put it together with what was very little time.’

Benn said he expected more acts to pull out than the few that did, including Arlo Parks after she tested positive for coronavirus.

‘In the main acts are younger people and the proliferation of the Delta variant at the moment, there’s a lot of it around younger people, so just on the law of averages, we would have said that there would have been more,’ he said.

‘But actually what a lot of the acts have been doing is self-isolating and bubbling before the performances, because they were so keen to get out here and perform.’ 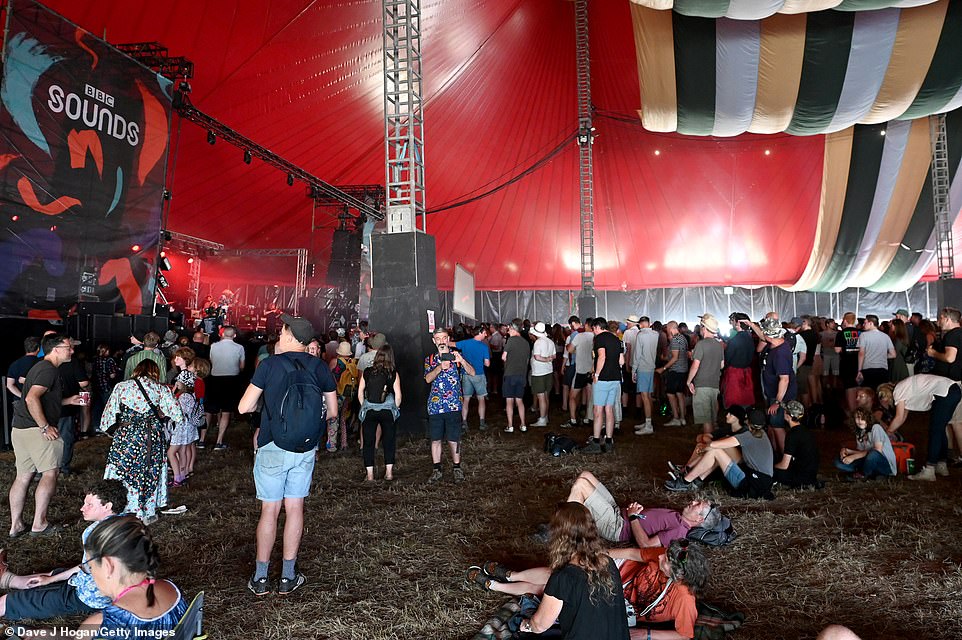 Revellers inside the BBC Sounds tent on the final day of Latitude festival, where masks are not mandatory 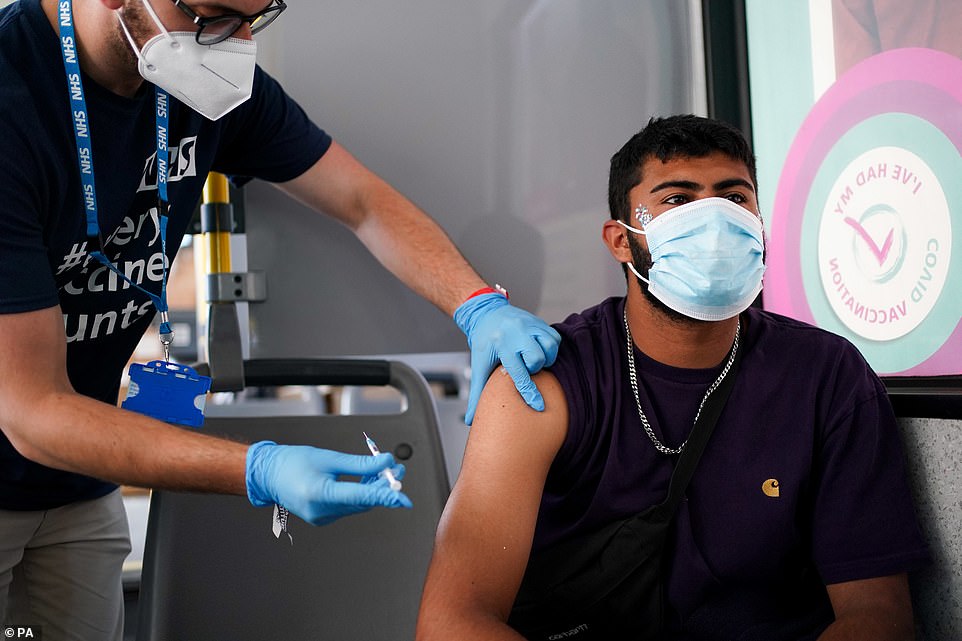 Latitude Festival, headlined by The Chemical Brothers, Wolf Alice and Bastille, is part of the Government’s Events Research Programme.

On Saturday, music lovers dived into a lake, took part in yoga and watched their favourite bands perform.

They enjoyed sets by Rudimental, Sea Girls, Nadia Rose and Kawala with no masks or social distancing as tightly packed crowds of people dance along to the upbeat music.

Festivalgoers must show proof of a negative Covid-19 test or be double vaccinated to access the site at Henham Park in Suffolk which also boasts its own pop-up vaccination clinic.

Photographs show revellers taking a zen moment with a spot of yoga or a quick dip in the lake inbetween drinks and musical acts.

Festivalgoer Rebecca Watson, 32, a creative director from London, who had her nine-month-old daughter Minnie in a baby carrier on her front, earlier said: ‘It’s just amazing, isn’t it? It’s great. And also for Minnie, as she’s never seen any of this before. It’s so good to see people, and happiness. I think it’s the tonic everyone needed at the end of last year.’

Kris Spandler, 31, of Brighton, who is working on a stand at the festival, said: ‘It feels amazing.

‘Last night was an amazing feeling, everyone back together again.

‘The feeling of the energy of everybody just enjoying each other’s company, watching a live act and listening, reacting as a crowd rather than just watching something at home for one-and-a-half years.’

He said the festival feels ‘safe so far’, adding: ‘Everyone’s approaching it like that. Everyone seems happy so far.’

Jason Appel, a 45-year-old accountant from north London, said: ‘It feels great, it was really nice, really happy when we walked in. 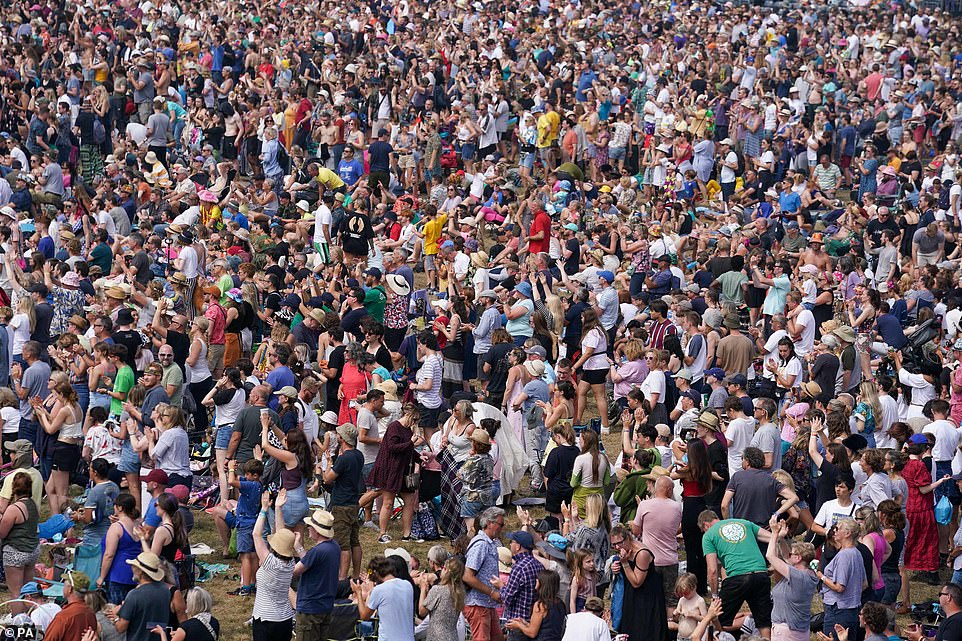 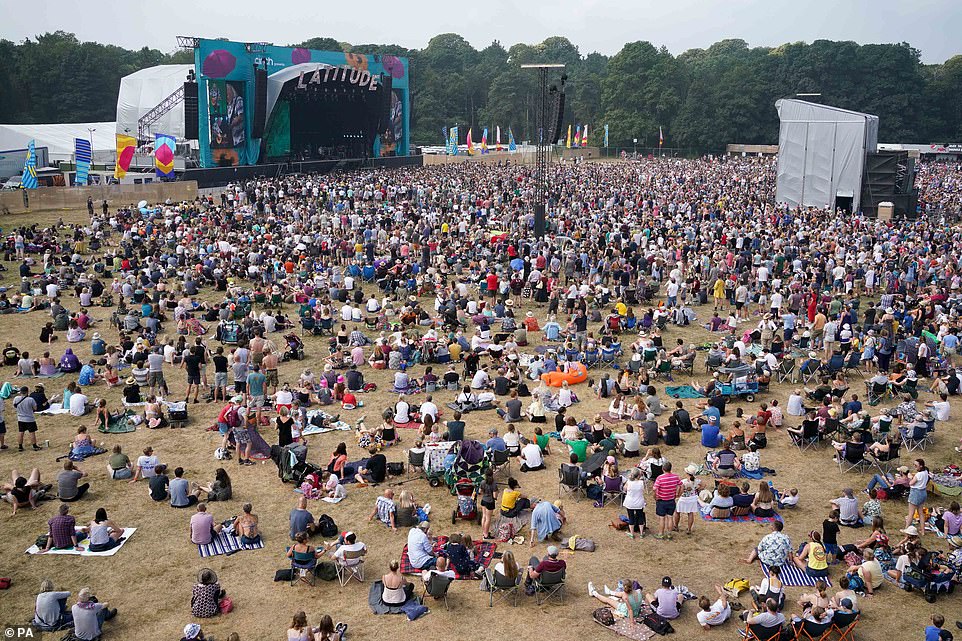 The sprawling crowds on the final day of Latitude, which has been part of a Government scheme, meaning masks and PPE were not mandatory 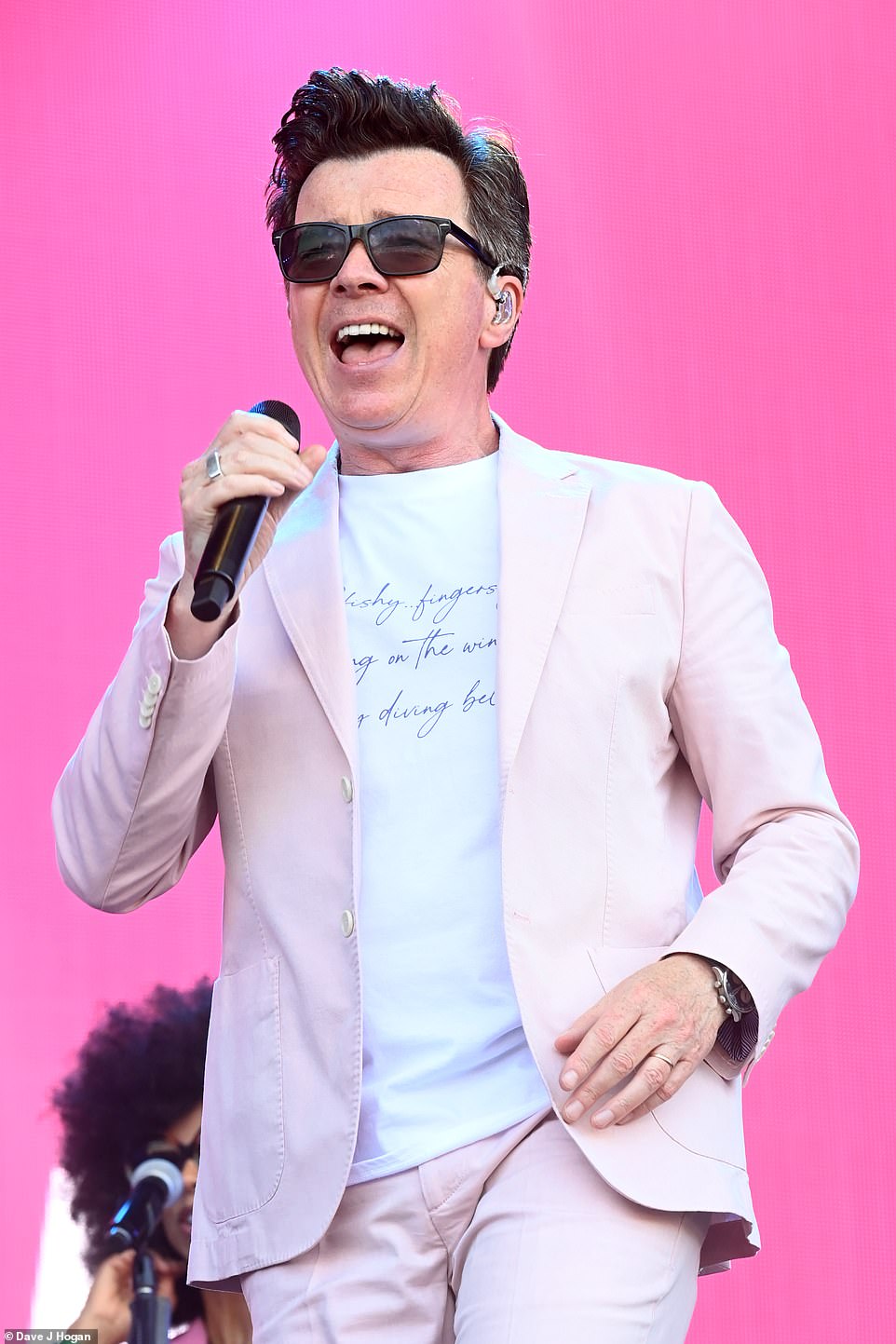 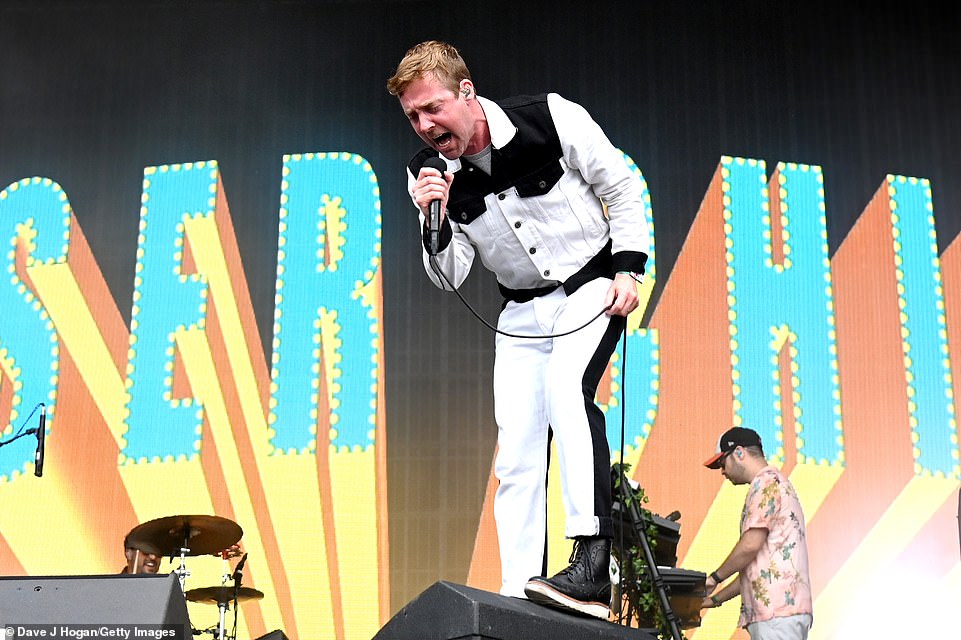 Kaiser Chiefs during their performance on the closing day of the Latitude Festival in Suffolk – which brought in 40,000 attendees 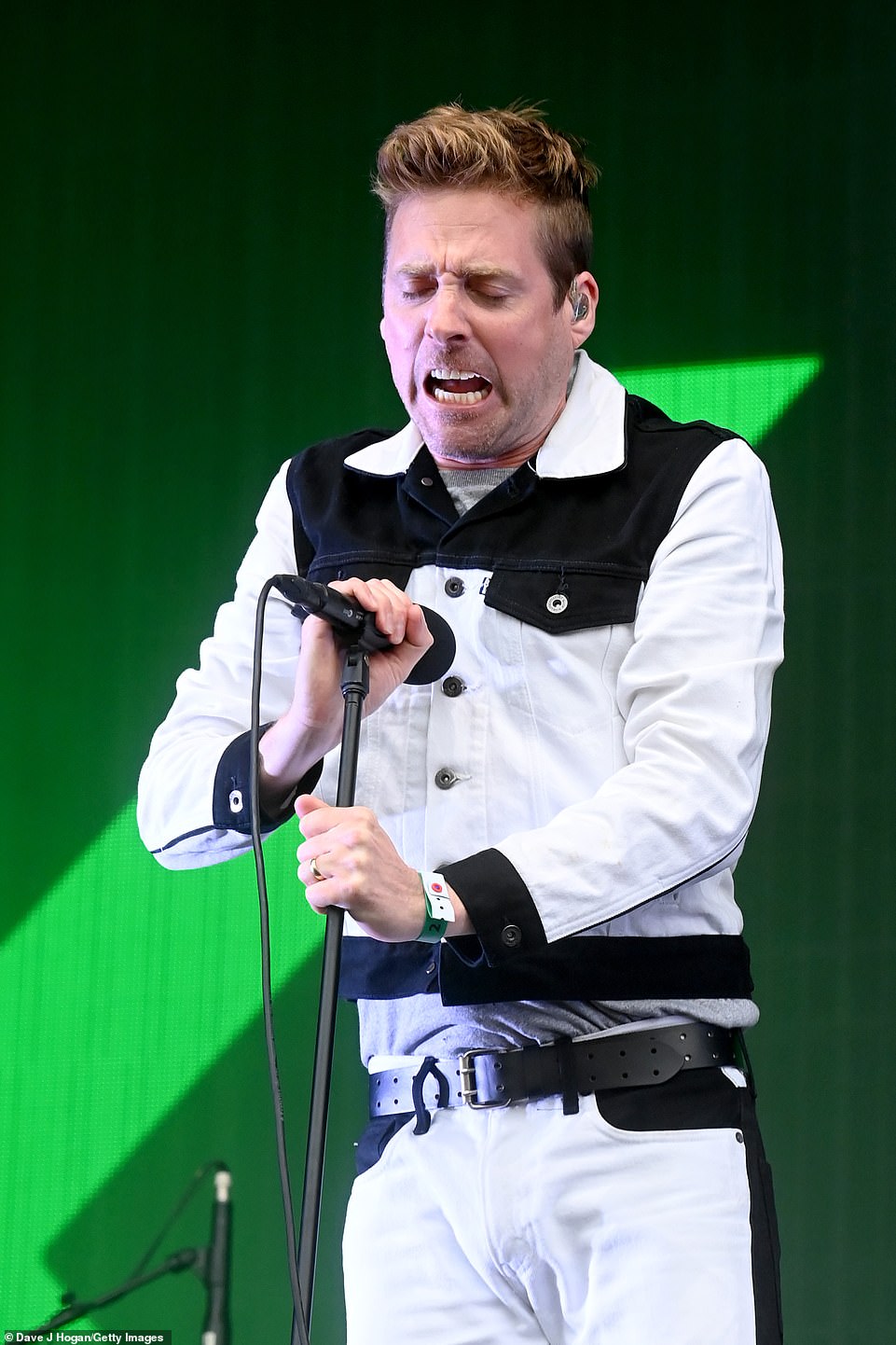 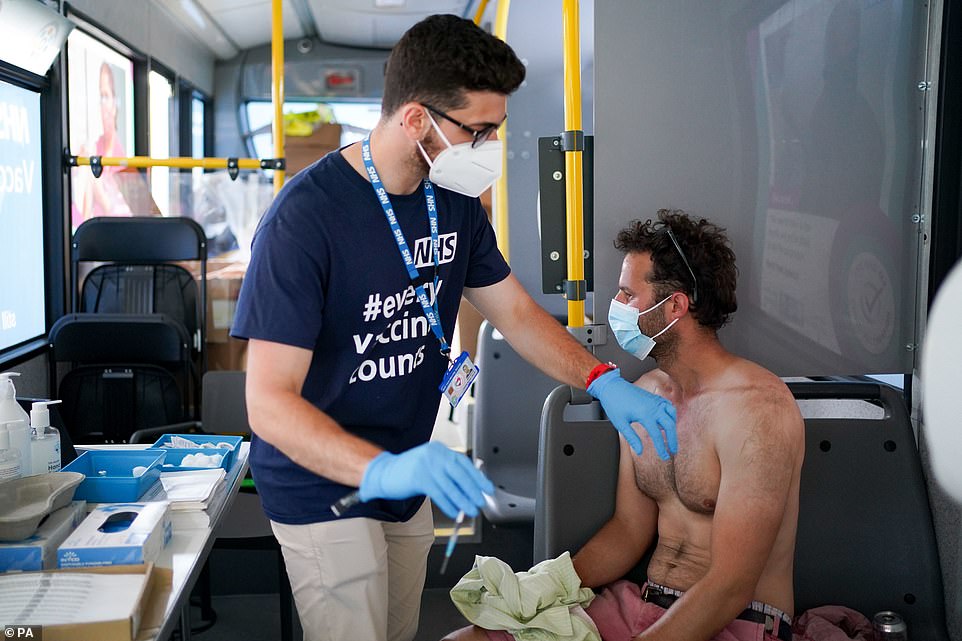 Another festivalgoer, Oli James, receives his second Pfizer jab at the pop-up vaccination bus at Latitude Festival in Suffolk 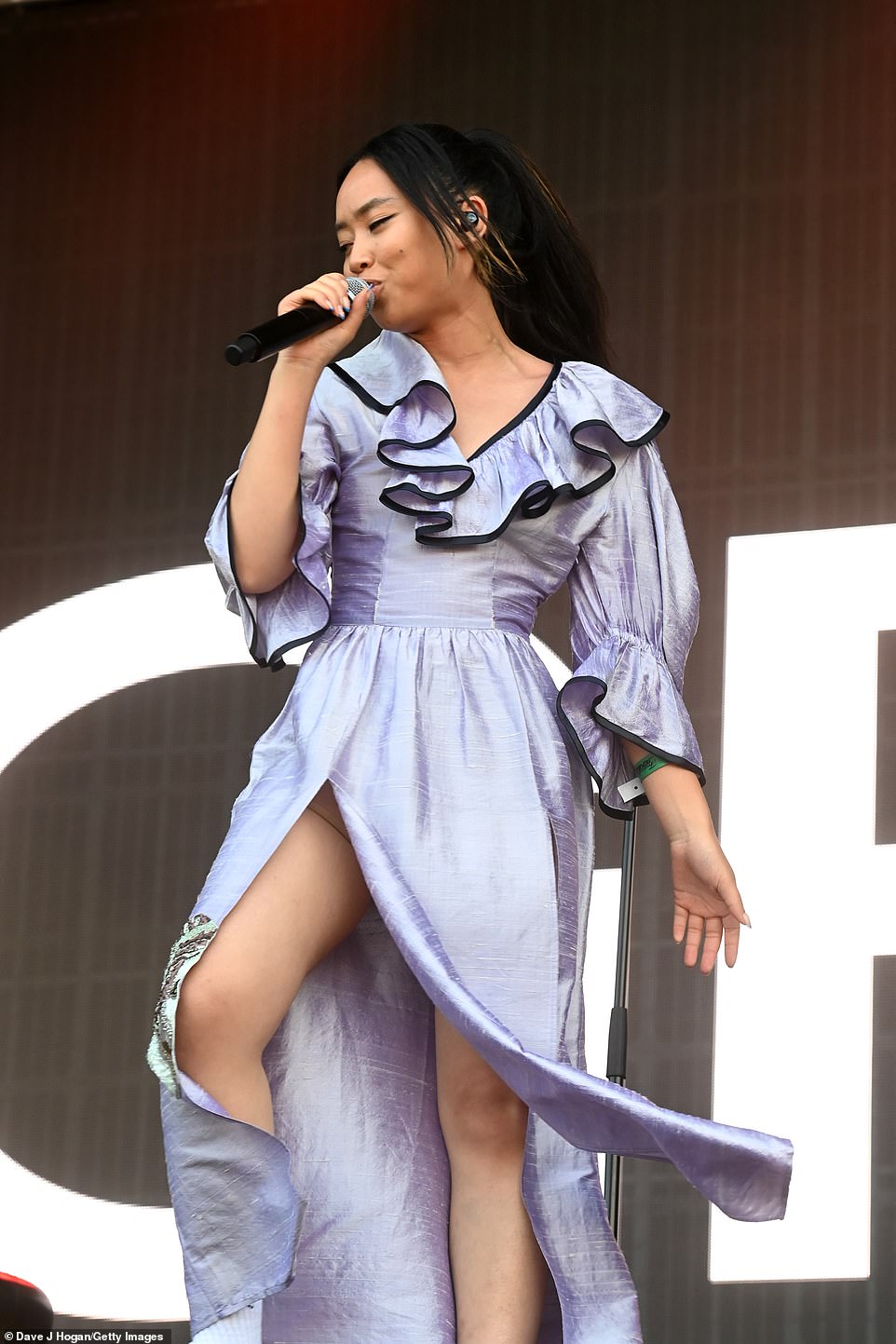 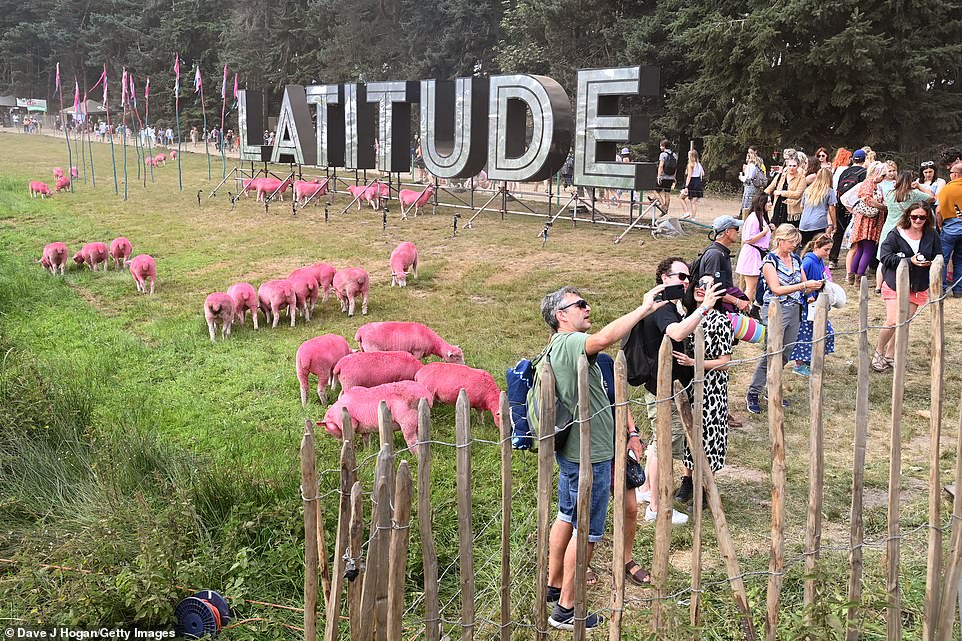 Festivalgoers take selfies with pink-coloured sheep grazing in the background, a staple of the Latitude event in Suffolk 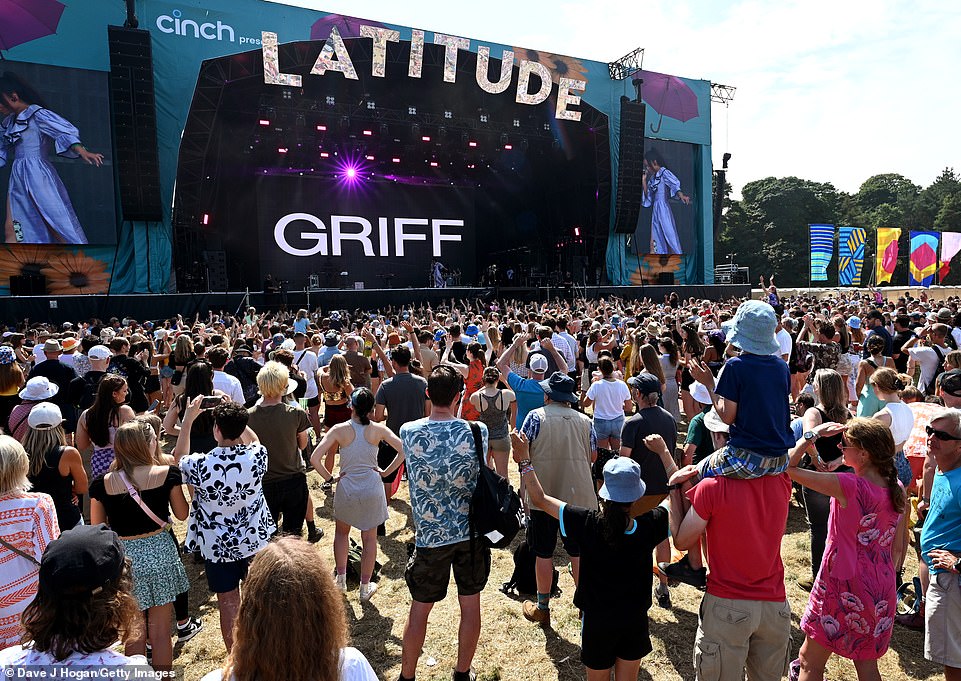 ‘Just generally nice to feel like you’re in a bit of a sanctuary, I think. I think if you’ve come to a festival in the first place you’re going to want to be in a place like this so for me it’s felt absolutely fine.’

University worker Stephen Matthews, 50, from Wivenhoe, near Colchester in Essex, said it felt a ‘little bit odd’ to be back at a festival.

It’s a little bit odd,’ he said. ‘Very happy in general, but standing in a crowd for the first time last night was a little bit strange, and feeling people come quite close to you was quite strange.

‘But good to hear live music. I think it is safe but I think there’s a natural anxiety there just because we’re not used to it.’

Latitude festival is ‘close to being the safest place in England’, its organiser said as the Suffolk event began on Thursday.

Melvin Benn, managing director of the Festival Republic group, told Sky News he felt ‘very relaxed, not anxious at all’ as the four-day music event got under way.

‘We had a great night last night. It was a huge party. None of the main stage acts were playing but there is a lot going on in the woods, on the lake and in the theatre area.

‘I’m very relaxed, not anxious at all. It is probably as close to being the safest place in England today really.’