CHICAGO (WBBM NEWSRADIO) — Decked out in their halloween costume “The Rona Destroyer,” Mayor Lori Lightfoot and the First Lady stopped in at Arts in the Dark Upside Down Parade in celebration of Halloween at Washington Park and gave out candy to families.

Lightfoot kicked off the day by leading the parade around the park, then hanging around to give out bags of candy to hundreds of families in their cars with children dressed up for the holiday.

“Halloween looks different this year, so we’re taking the proper steps to ensure everyone can stay safe — and have their candy too,” Lightfoot said.

Each car received various treats such as candy and pumpkins from booths set up throughout the park. Many organizations and sports teams were also present, showing off intricate costumes and playing music to celebrate the parade. People were dressed up as superheroes, cartoon characters, Dia de los Muertos catrinas, Oompa Loopas and more.

Tommy Hawk breaks it down at a Chicago drive thru trick or treat session with @chicagosmayor Happy Halloween! @WBBMNewsradio pic.twitter.com/UivBP2vemH

Barf, dressed as John Candy from the movie “Spaceballs,” was dressed up for a cause.

“Any cause you can think of — I normally do Make a Wish Foundation,” said the man dressed as Barf. 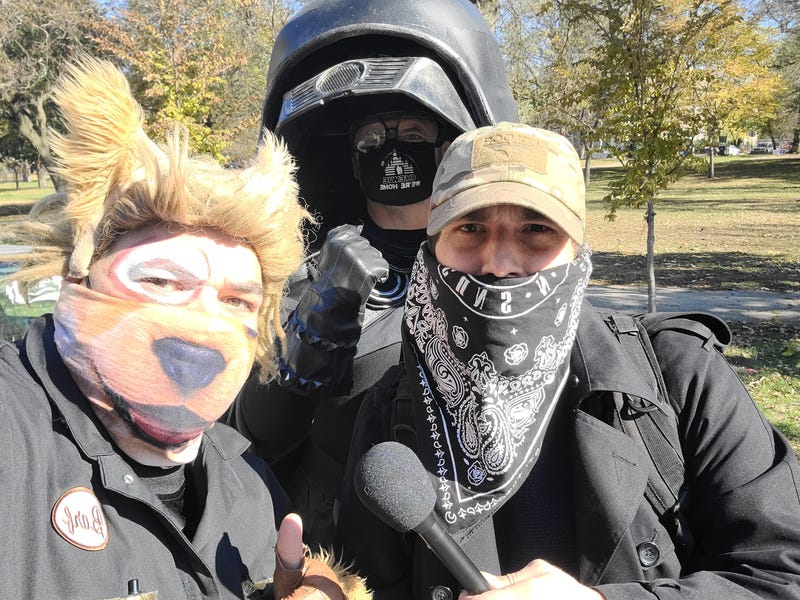 Blackhawks mascot Tommy Hawk was dancing to Michael Jackson’s “Thriller” while White Sox mascot Southpaw hung out on top of a van. Dia de los Muertos displays, or ofrendas, were set up through the park as well.

The parade was the grand finale of the city’s Halloweek campaign promoting fun Halloween events in a safe manner during the pandemic.