‘Out of the picture,’ African American Museum head says of renaming Fair Park institution after him

Dr. Harry Robinson Jr., founder, president and CEO of the African American Museum at Fair Park in Dallas, was adamant.

“It absolutely is not going to happen,” he insisted.

The revered local and national historian and keeper of African-American archives was not about to agree to any effort to rename in his honor the museum that he’d created.

“That is completely out of the picture,” he emphasized.

The 80-year-old scholar and archivist was being interviewed about whether he might soften his well-known stance against turning spotlights on him instead of the museum. As always, he rattled off several names of financial donors who he says are more deserving of such honors.

Naming others is a tactic that Robinson — an effective but stubbornly quietly behind-the-scenes operative — long has used to divert attention from himself. Spotlighting him is counter-productive to museum goals, he argues.

“I always prefer a conservative operating mode,” said Robinson, who has led the museum for 47 years.

Robinson founded the museum at Bishop College in 1974. The college closed in 1988. After a long and arduous campaign, the museum in 1993 moved into a new state-of the art building at Fair Park, where it has amassed numerous honors.

Despite a challenging shutdown related to the COVID-19 pandemic, museum executives and supporters say the institution has emerged smelling rosy, with enthusiastic, heightened attendance for programs and exhibitions. An array of publications, including D Magazine, Texas Highways and Dallas Observer, have reported on lofty honors the museum has received.

And that’s how Robinson Jr. wants to keep it. Always the museum. Never him.

Dr. Vonciel Jones Hill, museum board president, is campaigning for a Texas state legislative seat. She could not be reached for comment about the board’s current opinion of a fledgling grass-roots effort launched in 2019 to honor Robinson with a lasting project.

But Dr. W. Marvin Dulaney, an author, educator, historian and former museum volunteer, said he isn’t surprised that Robinson stays behind the scenes. Dulaney stepped forward in early 2020 when Robinson and Hill appointed him deputy director and COO to run day-to-day museum operations.

Robinson had chosen to concentrate on major fundraising and spearheading the museum’s “Strategic Plan for the Future.” He continually rallies support for ever-changing and permanent projects promoted by the museum, including the popular Texas Black Invitational Rodeo, the Texas Black Sports Hall of Fame, the Women’s History Month lecture series, the Scott Joplin Chamber Orchestra Concert in collaboration with The Black Academy of Arts and Letters, and the free upcoming Christmas Music Under the Dome and Christmas Marketplace on Dec. 11-12. (To learn more, visit aamdallas.org.)

Dulaney previously has said Robinson’s contributions in the arena of African-American history are unmatched. Still, he said he respects Robinson’s reticence.

“It’s so obvious it [the museum] should be named after him,” Dulaney said recently. “It’s his museum, his baby, his legacy. Like others, I would like for him to take the honor.”

Dulaney said he understands Robinson’s hesitance, though, because Dulaney himself had a similar outlook when in 2018 local historians formed the D/FW W. Marvin Dulaney Branch of the 106-year-old Association for the Study of African American Life and History. A lot of pressure falls on the person whose name draws such honors, Dulaney said.

Other educators and community leaders who have said they want Robinson permanently recognized at the museum include Dr. Thalia Matherson, Dr. George Keaton Jr., and Herdercine Nash. All said they will stand back until Robinson is ready to accept a proper tribute. Nash said she was among supporters who petitioned to get a street near downtown Dallas named for Dallas Black Dance Theatre founder Ann Williams.

Some community supporters have noted the Charles H. Wright Museum of African American History in Detroit that the African-American physician founded in 1965. The museum was renamed in his honor in 1998, when he was 79. He died four years later. 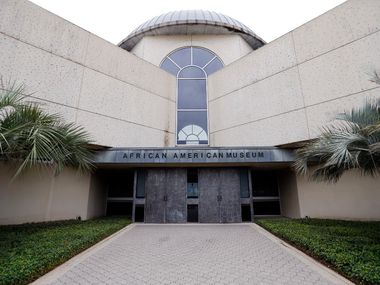 Two local museum supporters express some satisfaction, though, that, after much effort, they persuaded Robinson to sit for an extended, virtual oral history interview during the museum’s pandemic-related shutdown.

Education and nonprofit consultants Linda Dickerson Lamar and Helen Benjamin said their passion for having African-Americans tell their histories compelled them to create and personally finance an oral history project. They relentlessly persisted that Robinson agree to an interview about the museum’s creation and his nearly five decades of work leading it. They are fine-tuning the recordings and hope to make them available online by early 2022.

“Dr. Robinson has so much history in his head. We saw our job as downloading his brain,” said Benjamin, a retired West Coast community college chancellor now living in Dallas.

“We had to grovel, but it was that important to us,” said Lamar, a Bishop College graduate and nonprofit administrator. “Our African-American history too often gets lost. We have to be more strategic in preserving it.”